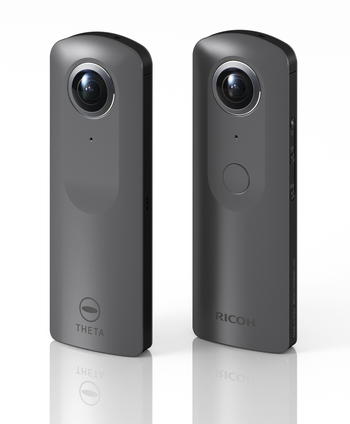 Ricoh would like to announce that we will be showcasing a sample camera of the newest model, which shoots high resolution 4K video in 360°, of the RICOH THETA series that shoots 360° images in one shot at the NAB Show 2017 held by the National Association of Broadcasters (NAB) in Las Vegas, USA from April 22 to 27.

Overview of the Product

Main Features
・Shoots 360° 4K30fps video
・A built-in 4-channel microphone that can record spatial audio to link to 360° videos
・360° 4K live streaming
・A dedicated expansion application makes function expansion possible (an Android-based operating system will be installed)
Notes: The above product specifications, exterior, and so on have yet to be finalized.