Tokyo and Berlin, 5 September 2013, Ricoh Company, Ltd. announced today the launch of the RICOH THETA, the world’s first mass-produced imaging device that encapsulates fully spherical scenes with one shot. The handheld device, to be sold at a base price of USD 399, will be available for preorder this month in France, Germany, the UK and the US at theta360.com.

Developed and manufactured by Ricoh, the device will be marketed by subsidiary Ricoh Imaging Company, Ltd. through its French, German, UK and US online-exclusive sales channels starting October.

The RICOH THETA features a proprietary ultra-small twin-lens folded optical system that captures the scene around, above and below the device in one shot for unprecedented, fully spherical images. Fitting easily in a pocket or the palm of a hand, the slim, lightweight (95-gram) RICOH THETA is a go-anywhere device suited to confined spaces, the great outdoors and everywhere in between.

The device is synchronized with smartphones, where images can be immediately transmitted via Wi-Fi® and viewed with a dedicated free app. The app also allows images to be pinched, swiped or rotated to edit size, shape and composition. Images uploaded to theta360.com can be shared on social networks such as Facebook™, Twitter™ and Tumblr, as well as Microsoft®’s Photosynth®.

At launch, the RICOH THETA will be compatible with the iPhone 4S and iPhone 5 running on iOS™ 6.0 or above, supported by RICOH THETA for iPhone, a free iOS app available at App StoreSM. Android™ compatibility is expected before the end of the year.

“The RICOH THETA enables people to capture, explore and share their creativity and new visions of life,” said Wataru Ohtani, associate director of Ricoh’s New Business Development Center. “By encapsulating everything and everybody within a cohesive sphere in one simple shot, it will help users to perceive the interconnections that we all share. The RICOH THETA connects users with their own cognitive and non-cognitive senses, and ultimately with other people.”

“The RICOH THETA is a groundbreaking device for general consumers of all ages and all photographic skill levels,” said Noboru Akahane, president of Ricoh Imaging. “Its unprecedented capability to capture fully spherical images, coupled with affordability and user friendliness, makes the RICOH THETA a tool that anybody can use to discover and share their powers of creativity.”

“The RICOH THETA isn’t just a big step forward in panoramic photography,” according to Blaise Agüera y Arcas, Distinguished Engineer at Microsoft, and Architect of Photosynth. “It changes the nature of photography itself: You can shoot first and crop later, or share the full sphere including the photographer. It’s an exciting product, and Microsoft is proud to be partnering with Ricoh by integrating support for the RICOH THETA in the Photosynth mobile app.” 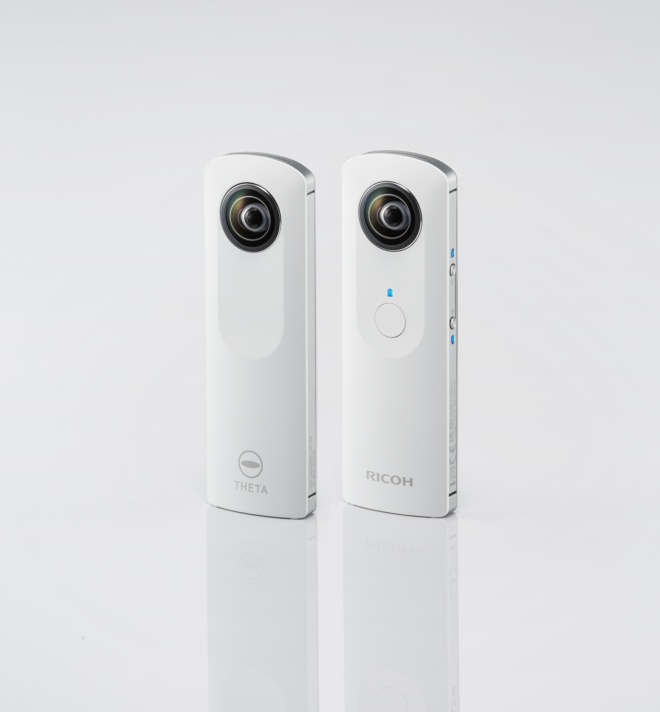 The majority of the company’s revenue comes from products, solutions and services that improve the interaction between people and information. Ricoh also produces award-winning digital cameras and specialized industrial products. It is known for the quality of its technology, the exceptional standard of its customer service and sustainability initiatives.

Under its corporate tagline, imagine. change. Ricoh helps companies transform the way they work and harness the collective imagination of their employees. 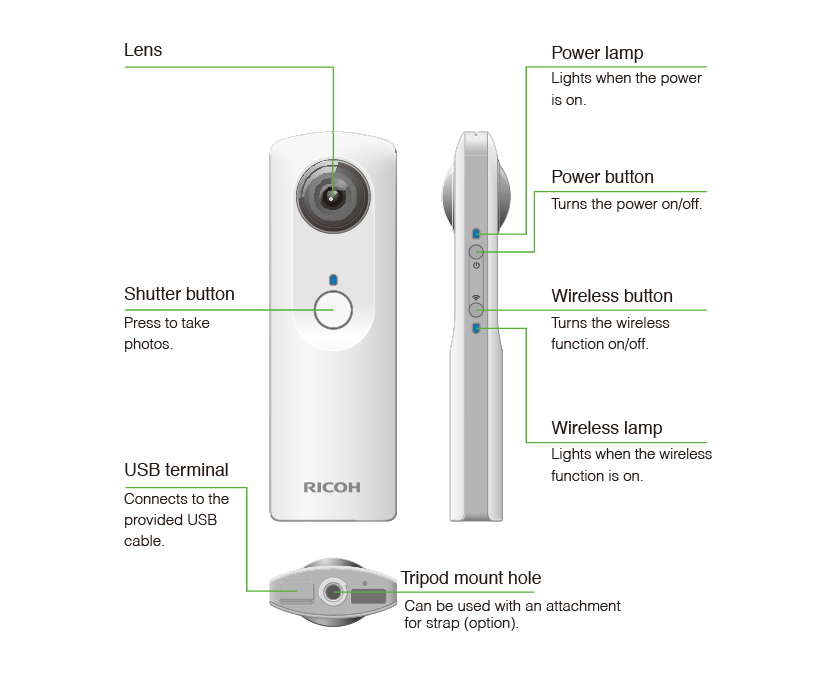 The RICOH THETA offers simplicity and user-friendliness by automatically correcting slants. Fully spherical images can be captured easily with a single shot from any position without aiming or pointing the device. The image location can be recorded by using the GPS function of an iPhone connected wirelessly to the RICOH THETA.

The PC-dedicated RICOH THETA for Windows® / Mac® allows high-resolution images to be saved and viewed with a PC. Images can also be transferred to PCs via USB cable. Like the iPhone app, it allows images to be shared on Facebook, Twitter and Tumblr. It can also be used for firmware updates. The app is available at theta360.com. Adobe® AIR® is required.

The RICOH THETA will be sold for a pre-tax base price of USD 399 in the US. Other prices, all tax-inclusive, are EUR 399 in France/Germany, and GBP 329 in the UK.

An ATTACHMENT for STRAP will be sold separately as an option allowing users to suspend the RICOH THETA from their necks and arms, enhancing portability.