A New RICOH THETA Model Is Set to Be Released! RICOH THETA SC2, a Model with Simple Operations and a Variety of Functions for Easy Use

Ricoh has announced the release of the new RICOH THETA SC2, an entry-level model of the RICOH THETA 360° camera series with simple operations and a variety of functions for easy use. 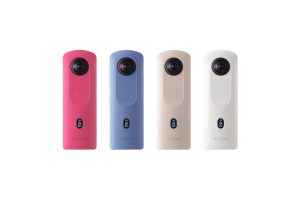 The RICOH THETA SC2 is an easy-to-use entry-level model in the RICOH THETA series, allowing anyone to capture high-quality spherical images easily. It is capable of capturing spherical 360° still images at the equivalent of approximately 14 megapixels, and smooth, immersive 360° spherical video at 30 fps (frames per second) in the equivalent of 4K (3840 x 1920 pixels). Additionally, the RICOH THETA SC2 comes with shooting modes such as “Face” mode, which recognizes human faces and applies skin smoothing, and “Night View” mode for shooting low-noise footage at night, which configure the camera for specific scenarios without requiring complex settings.

In addition to the status display OLED (Organic EL display) in the lower section of the body that allows at-a-glance checking of a range of information such as setting modes and battery power remaining, the RICOH THETA SC2 also features a new button that lets the user switch to self-timer mode, making the camera much easier to operate in a standalone manner. Staying true to the product concept of a compact, lightweight body, the RICOH THETA SC2 can be used as a partner that people can carry with them to record the events of their day. The lineup features four different Fresh Colors, allowing users to choose a color variation to suit the scenario in which they will use it or their preferences. This is the perfect camera for people who enjoy sharing pictures and videos on SNS, or for those who wish to start using a 360° camera.